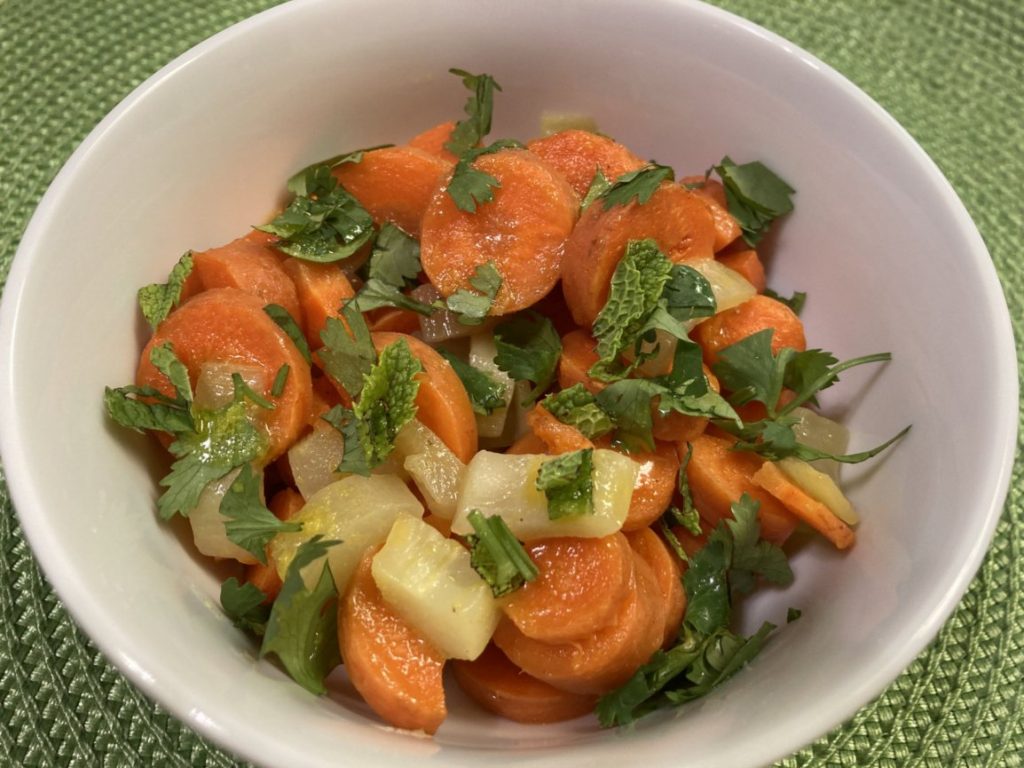 What to Do with All Those Cucumbers!

If you’re looking for several ways to use the abundance of cucumbers that recently burst forth in your garden or arrived fresh from a farm in your produce box, I’ve got some quick and easy recipes for you.

Let’s start with this Carrot and Cucumber Salad. You could eat the carrots and cucumbers raw, as you might expect, but instead I cooked them, Asian style, for just a few minutes. Add salt, fresh mint, cilantro, and lime—and voila—culinary delight! Not only are the cucumbers delicious when cooked, but they are also easier to digest. 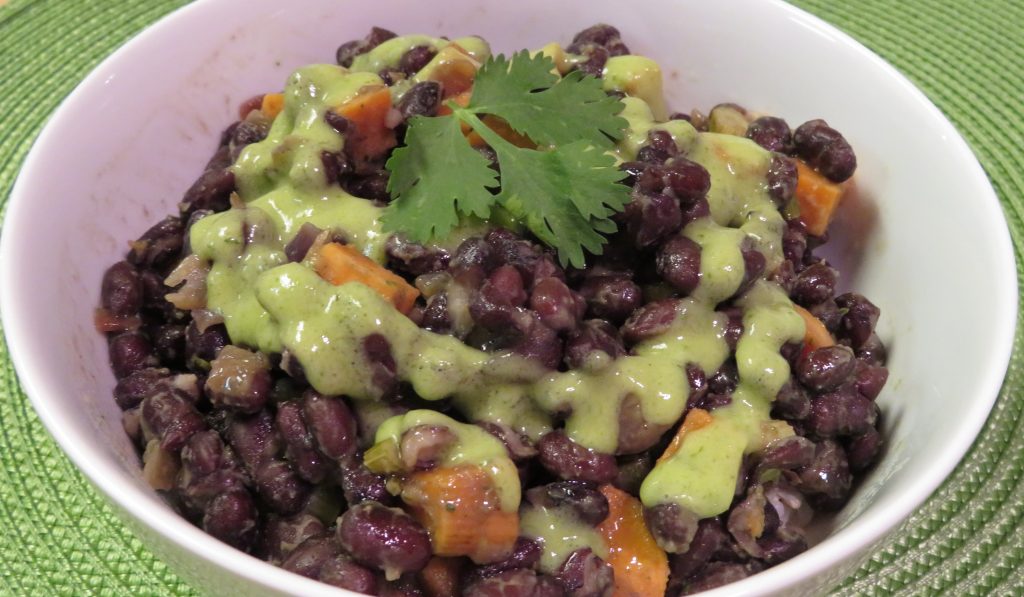 Potluck Picnics (and Some Good News about Lectins)

Earlier this week I began talking about summer salads, and today I offer you this Black Bean Salad with Avocado Dressing for your July 4th celebration and for ongoing summer picnics and potluck events.

In the past my go-to veggies to accompany most any black bean dish would have been red bell peppers and tomatoes, but now I find myself looking for something different. 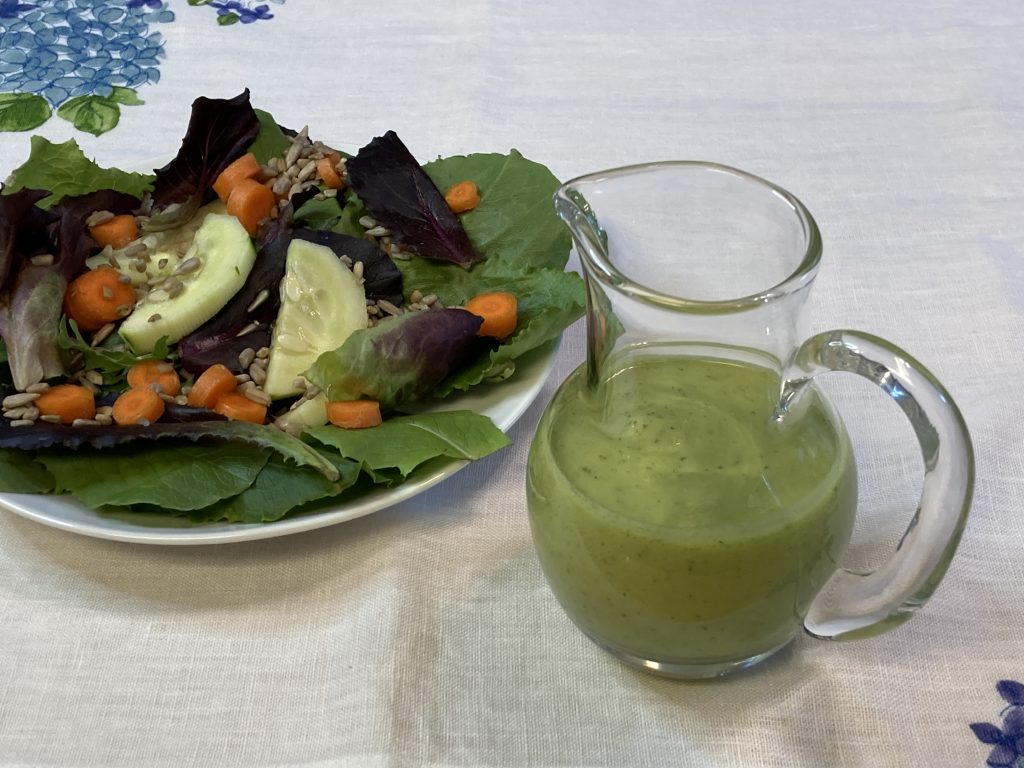 It’s official: summer is here and it’s time to welcome the season with all kinds of salads that sparkle with flavor—once they get a delicious topping like this Easy Avocado Salad Dressing! Yes, there are many commercial salad dressings that will do, but there’s nothing quite like the taste of a fresh dressing you whip up yourself just before eating.

Any simple green salad (like the salad with cucumbers, carrots, and sunflower seeds pictured here) will shine with this garlicky sauce. What about dressing up an ordinary potato salad? Or try this on a black rice salad? Bean salads transform from ho-hum to woo-hoo with this dash of delicious! 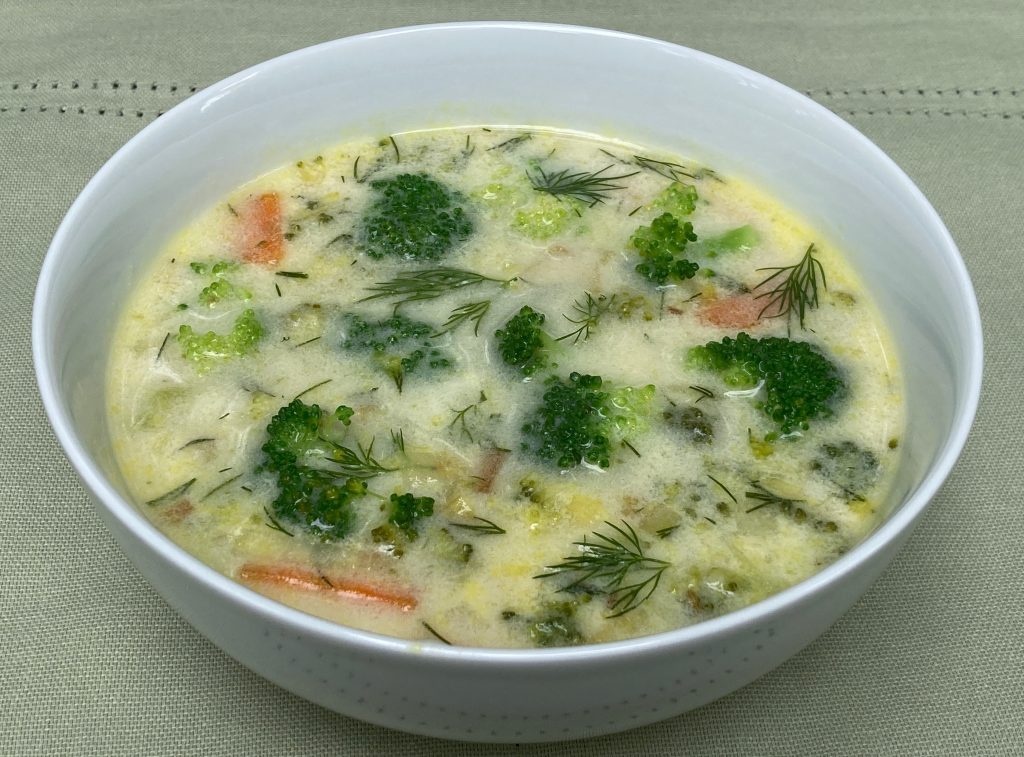 It seems to me that when it’s hot and humid outside, heavy foods are especially unwelcome in the belly—which is just one reason why I think you will enjoy this easy, delicious, and cooling Summer Broccoli and Carrot Soup! It will serve as a great centerpiece for a vegetarian or vegan meal and will add bright colors to the omnivore’s table as a refreshing appetizer or side dish. 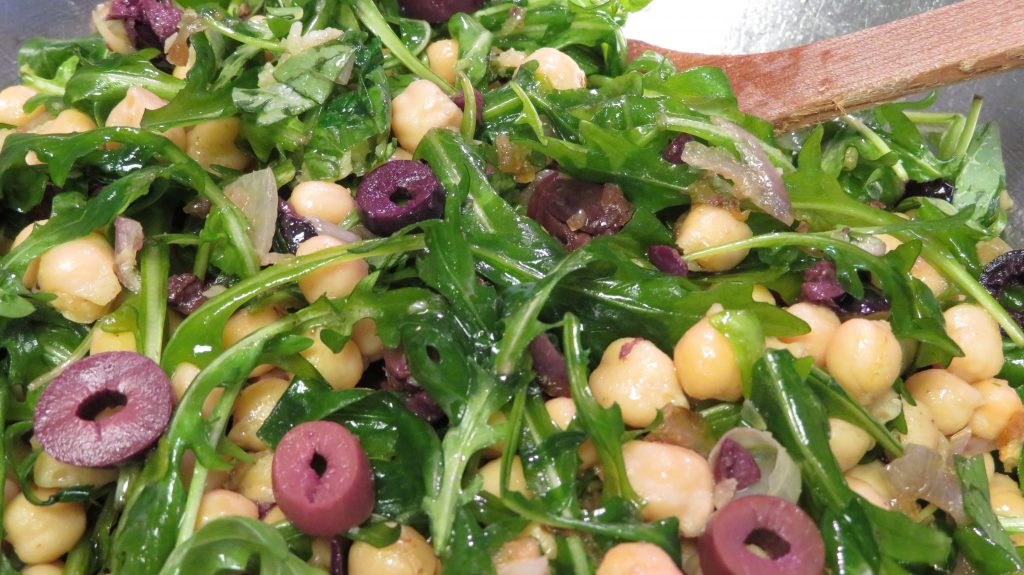 This Simple Chickpea Salad is not only delicious and easy, but will also wow everyone this Memorial Day, from omnivores to vegans to gluten-free diners. I will take this holiday prelude as an opportunity to remind my omnivorous readers how thoughtful it is to provide a vegan protein when you’re serving a group of partiers with diverse dietary needs. 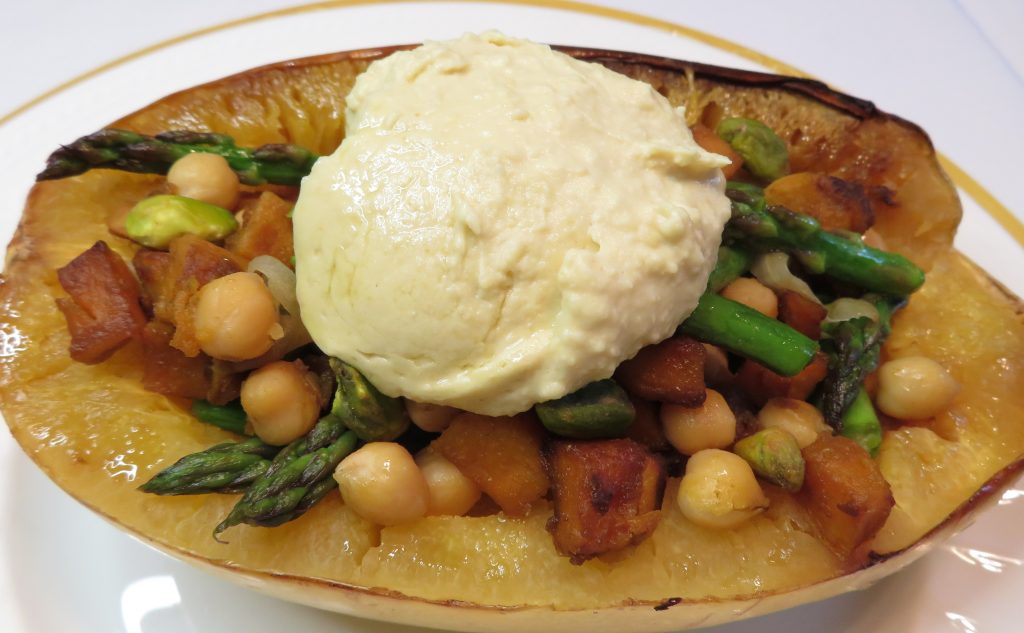 Today, I present you with a recipe for Baked Spaghetti Squash with Chickpeas & Veggies. Now that you may be starting to dine again with a few friends on occasion or meeting up with family you haven’t seen in more than a year, you might want a dish that impresses them with the delights of vegan cuisine. This entrée will wow them—even If I do say so myself!

Admittedly, this stuffed squash is a bit of a project. There is nothing difficult about it, but it has several steps, so plan to make this when you have a couple hours to relax and enjoy cooking.

This recipe takes advantage of my recently posted Asparagus & Sweet Potato Side, which becomes the filling of the scooped-out spaghetti squash boat. 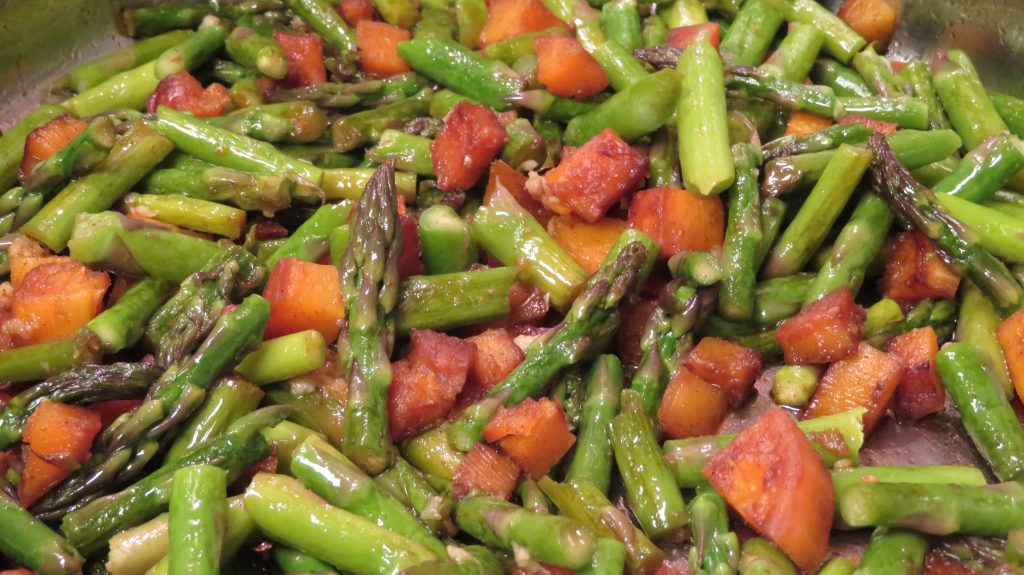 Can’t Get Asparagus out of My Mind!

That’s the sum of it: organic asparagus spears are still available so I’m using them every which way, whether as an Asparagus & Sweet Potato Side, in a simple gluten-free Asparagus & Sweet Potato Pasta, or as a topping for Baked Spaghetti Squash with Chickpeas & Veggies (recipe coming soon on this blog). And of course, my now famed Asparagus Soup (Sacred & Delicious, page 92, made perfect with Easy Vegetable Soup Stock (Sacred & Delicious, page 90). After all, asparagus is the culinary herald of springtime, and it must be eaten with reverence! 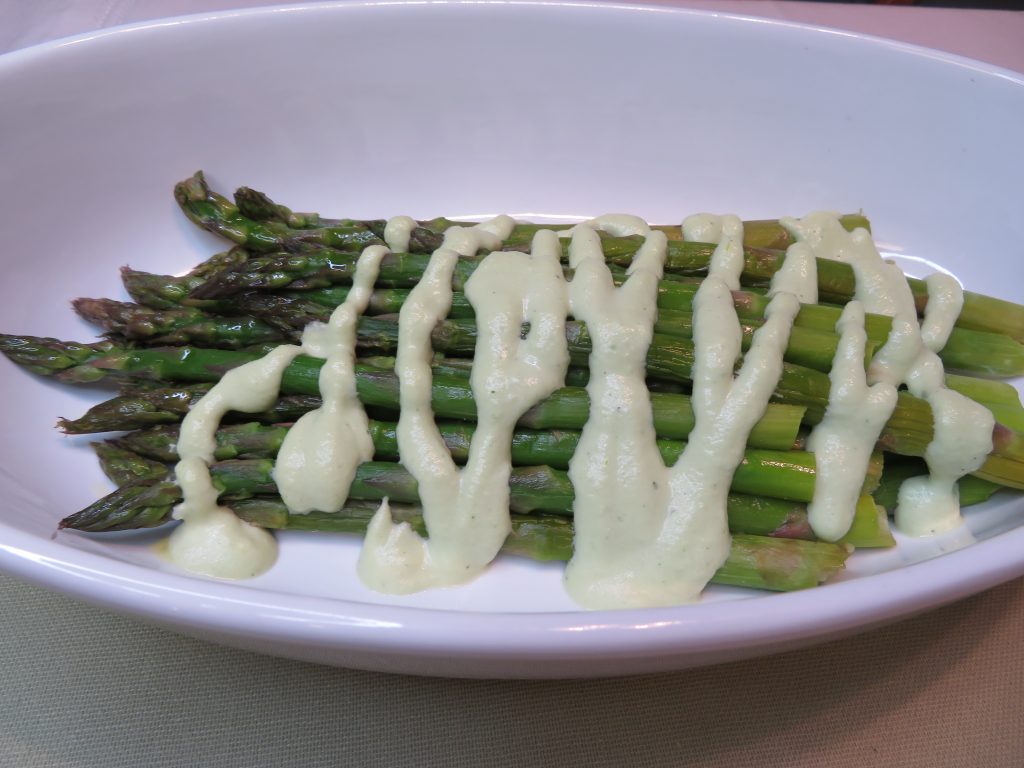 Happy spring, dear readers, and welcome again to the organic asparagus that can be found in abundance in March and April—in grocery stores, if not in your garden! My annual recipe addition to welcome spring always centers around asparagus, and this year’s installment includes a simple and delicious sauce for grilled or pan-seared asparagus. It’s perfect with any meal and ideal for Passover. The best part is that it’s fast, easy, and delicious! It’s also vegan and gluten-free.

I made the sauce with blanched almonds, as these are the preferred nuts, according to Ayurveda. They are lighter and easier 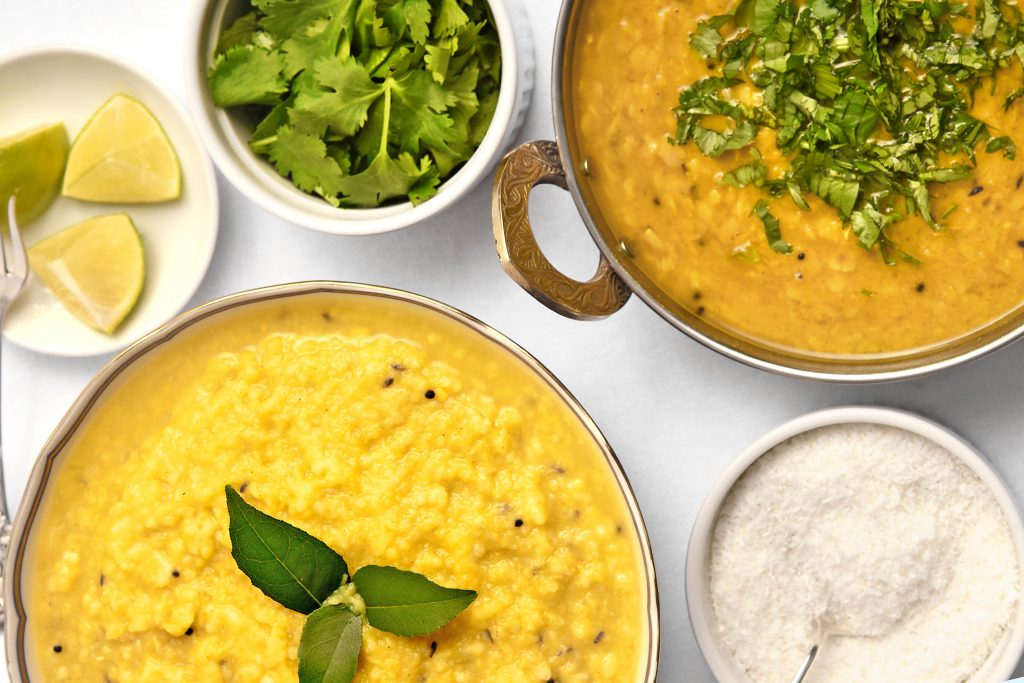 But I had married Tom a few years earlier, who was in chiropractic school at the time, preparing to embark on a second career that would include becoming an Ayurvedic practitioner and registered herbalist. My husband pointed me toward a new paradigm 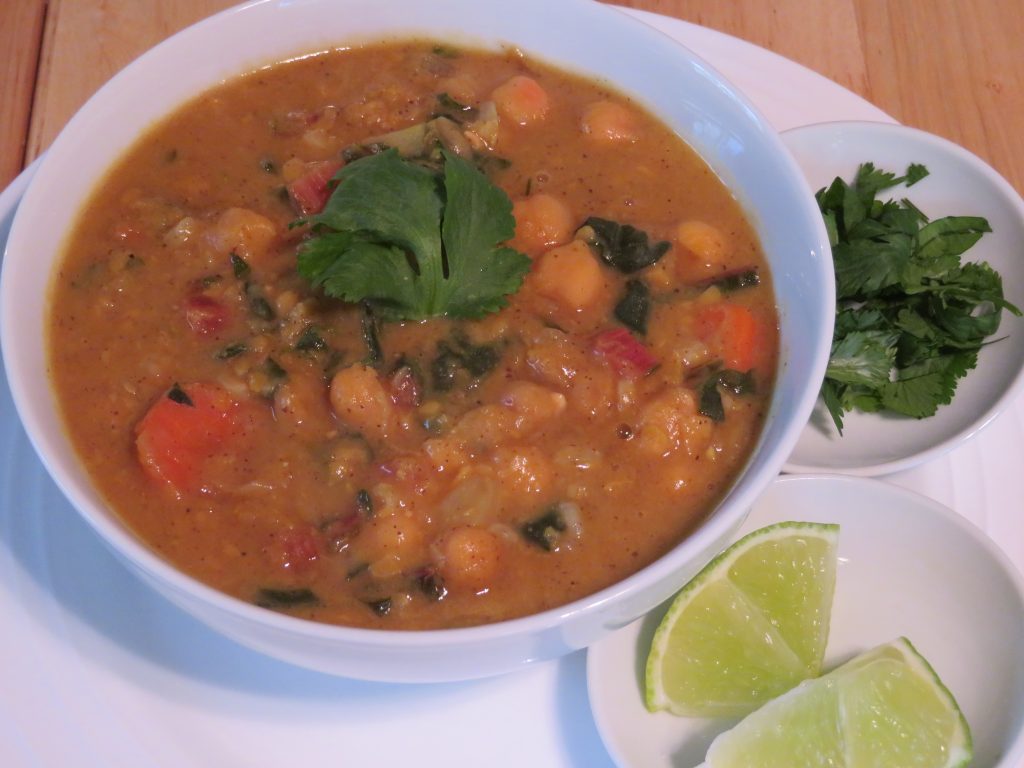 In North Carolina, we’re catching the second winter storm to paralyze much of the country this week, but we have been blessed in my house to still have electric power—making it possible to invent this divinely inspired Chickpea Stew with Almond Butter. The first reviews to come in from my husband and friends who received a gift bowl are “Wow!” and “That was really delicious! Do you have a recipe?” Yes, dear ones, I do.