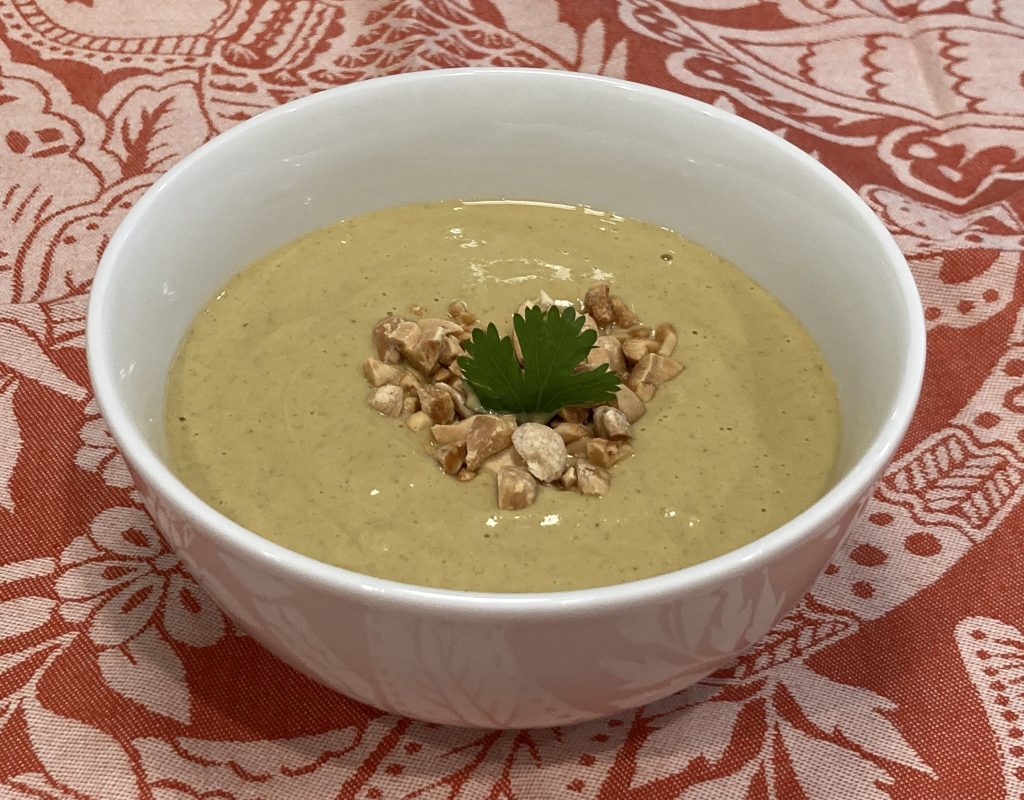 Today’s recipe for Peanut Butter and Cucumber Soup is the perfect remedy for this week’s heat wave hitting the South. It’s going to be 100ºF today in Raleigh, North Carolina, and with the humidity heat index factored in, forecasters promise it will feel like a blazing 109º—too darn hot for June! This is an ideal time to make some fun dishes that satisfy your hunger without ever turning on a stove.

The central ingredient in this delicious soup is, of course, peanut butter—which is a bit heating to the metabolism, according to Ayurveda. For this reason, I balance the recipe with cooling foods: a seeded cucumber, cilantro, and mint. (Cilantro haters can just use more mint!)

A Principle of Ayurveda

In Sacred & Delicious, I talk about a fundamental principle of Ayurveda: Like increases like; opposites create balance. (See pages 19–30.) If it’s cold outside, most of us feel better when we sit by a blazing fire. When it’s hot outside, we appreciate air conditioning or a cool breeze. In the same way, we can balance the food on our plate by choosing foods with opposite qualities.

For example, if you’re making a spicy dish with jalapeno peppers, you might want to have a side salad with cooling cucumbers and mint at the same meal. Or, say, you’re eating a big summer salad with lots of cucumbers and iceberg lettuce, which are naturally cooling, you might be drawn to add some lemon, lime, or balsamic vinegar, because the sour taste is naturally heating as well as an opposite flavor.

There are endless ways of balancing individual dishes or menus. I have learned to do this over time myself by studying Ayurvedic cookbooks that list foods and their qualities. In Sacred & Delicious, I explain the qualities of the foods in most of my recipes.

I tried making this Peanut Butter and Cucumber Soup two different ways, choosing a different fruit or vegetable each time as a thickener to give the soup some substance.

The first time I made the soup with an avocado, which works fine, as it has a neutral flavor. The upside to avocado is you can make the full recipe in your blender without using a stove. The downside, for some, will be the fact that you will have two or three fat sources, which may add some fat to your belly as well!

For my second test batch, I baked a small sweet potato and then let it cool before making the soup. Upside: quite delicious! Downside: it takes more time, and the oven will heat up your kitchen. I solved this problem by baking the potato in the early morning before it got hot outside. The potato was completely cool and soft by the time I was ready to assemble the soup.

I tried the soup first with coconut milk and then with freshly made almond milk, and we were perfectly satisfied with the lighter almond milk. I also tried it with soup stock, but that seemed to mute the peanut flavor, so I dropped stock from the recipe. Finally, I tested the recipe with a clove of minced garlic and later with a teaspoon of freshly grated ginger root, and the ginger won our taste test. Either of the pungent flavors will help you to digest the cucumbers.

Play with this recipe and discover another yummy summer dish—Peanut Butter and Cucumber Soup!

Preparation Time: About 15 minutes active
Plus time to bake a sweet potato for that option
Serves 4 to 6

Between the nut butter and options with avocado and coconut milk, this is a rich and filling dish! I suggest that you serve it as a one-cup appetizer before a light meal.

1. If using the sweet potato, bake it at 450ºF for 1 hour or until completely tender.

2. When ready to make the soup, add the sweet potato or avocado flesh to a blender and discard the skin. Remove 2 or 3 of the woody outer layers of the lemongrass, cut off the ends, and slice the remaining tender stalks into 4 pieces before adding to the blender.

3. Add all of the other ingredients except the chopped peanuts to the blender and operate the blender until the soup is silky smooth. Add more liquid if you prefer a thinner soup. Add salt and lime to taste. Serve at room temperature or slightly cooled with chopped peanuts sprinkled on top of each serving.

Peanut butter increases pitta, so save this dish for an occasional treat.

Peanut butter and coconut milk increase kapha, so this dish is best avoided if you have a cold or cough. Use almond milk instead of coconut.