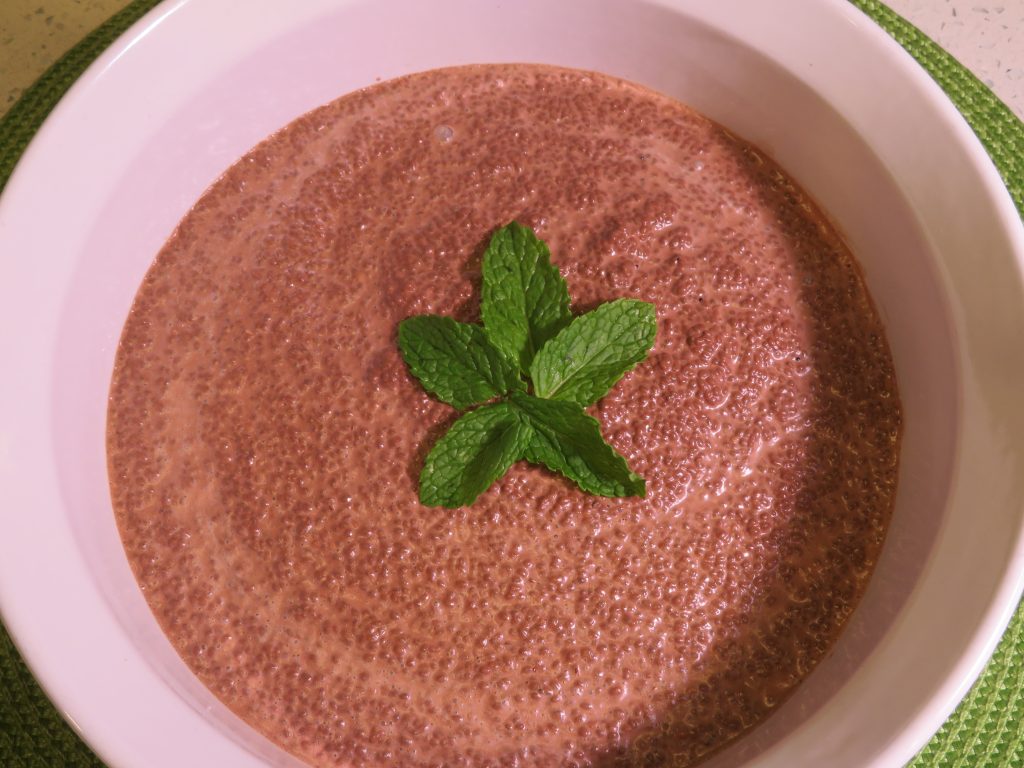 If you’ve never tried making chia pudding, I’ve got a sweet surprise for you with today’s recipe—Chocolate Mint Chia Pudding. You will be hard pressed to find a quicker or easier dessert to make from scratch. It’s totally delicious, of course, and pretty much guilt free!

For the uninitiated, chia seeds are tiny seeds that swell in liquid, creating a gelatinous substance. For this reason, the seeds are perfect for puddings and are often used in vegan recipes as a replacement for eggs. Research on chia seeds suggests that they may contribute to disease prevention because they are the richest plant source of omega-3 fatty acids.

In addition to their claim to fame because of omega-3s, chia seeds are high in calcium and trace minerals and have a modicum of protein and fiber, making them easily marketed as a “super food.” And chocolate is now famous as an antioxidant, much to chocolate lovers’ delight.

But we’re not quite done yet with this analysis. Although anything chocolate is on my list of favorite deserts, chocolate increases all the doshas, according to Ayurveda. More specifically, chocolate can cause acid indigestion (a pitta problem) or agitation (a vata problem), disrupting sleep. Once you add sweetener—which is necessary; plain cocoa is so bitter—kapha becomes disturbed as well.

Now let’s apply the principle to this recipe:

A Note of Caution

Although chia seeds are generally a healthy addition to one’s diet, here’s a note from the Harvard School of Public Health newsletter:

“There are a few rare cautions when eating chia seeds. A case report presented at the American College of Gastroenterology Annual Scientific Meeting in 2014 made headlines describing a patient who ate dry chia seeds followed by a glass of water. The seeds expanded in the esophagus and caused a blockage. Because they quickly swell after absorbing liquid, it is advised to eat chia seeds that have already been soaked in liquid or are served with a moist food, such as oatmeal or yogurt. Do not eat dry chia seeds by themselves. People who have dysphagia, a condition that causes difficulty in swallowing (as was the case with this patient) or other digestive issues, should eat chia seeds with care.”

Enjoy this yummy Chocolate Mint Chia Pudding to bring extra joy to your family during these final vacation weeks!

PS If you avoid mint while taking homeopathic remedies, just omit the mint and enjoy a velvety dark chocolate pudding.

Preparation Time: About 10 minutes plus 3 hours’ refrigeration to set
Serves 6 to 10

Mint extract can overpower the flavor of chocolate, which is why I offer a range for the amount to use. You may want to experiment to find the perfect sweet spot for your taste.

Cook’s Tip: 1) The CAL Sure brand of stevia is the best we’ve found. 2) I used two kinds of nut milk but use just one if you prefer. 3) Mix all ingredients in the same serving dish, if you are not concerned about presentation.

1. Place the first six ingredients (everything prior to the chia seeds) into a bowl or (for ease of pouring) a 4-cup glass measuring cup. Stir well with a whisk. Add the chia seeds and mix well for about 1 minute. Then, pour the mixture into a 9-inch round casserole dish or into individual serving bowls.

2. Cover the pudding and refrigerate until it’s set—at least 3 hours or overnight. Serve with fresh mint leaves, if you like.

Because chia seeds are so light, make this entirely with high-fat coconut milk, which is calming to vata.