Bring on the Cucumbers! 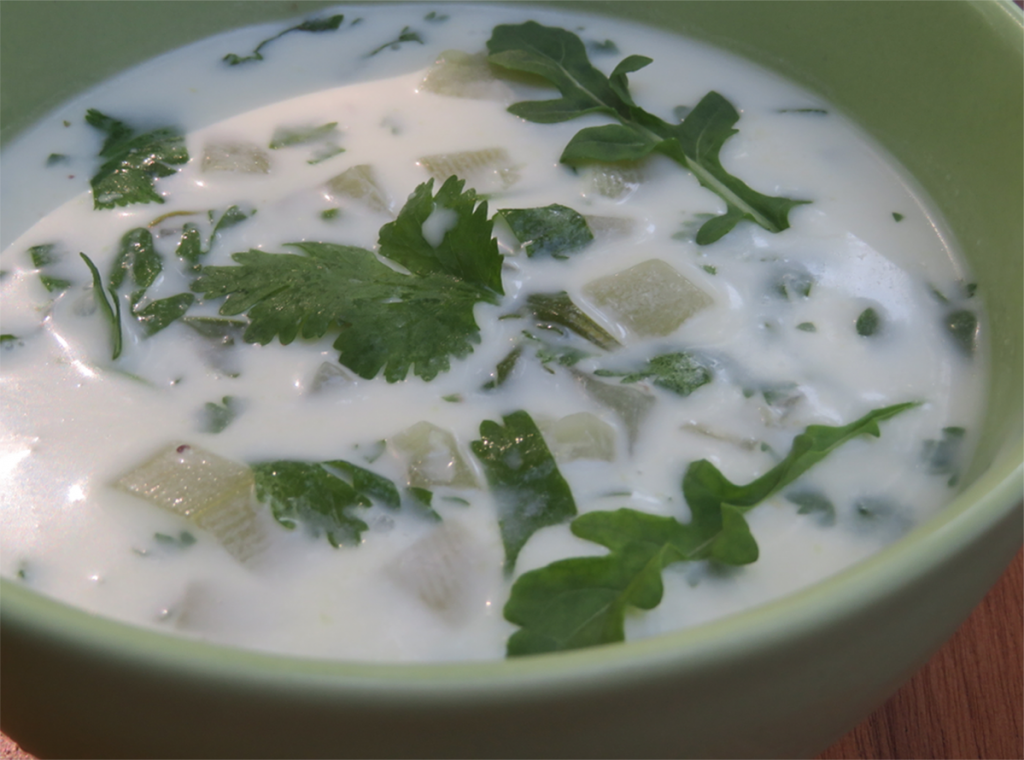 Ayurveda’s common-sense dictum is that opposite qualities balance one another—whether in the body, the mind, or the emotions. So, to quell the last of the summer heat, I call for balance and say, “Bring on the cucumbers with this lovely Cucumber and Coconut Milk Soup!”

In this yummy summer soup, the cooling power of cucumber is augmented by coconut milk, cilantro, and mint, all which cool the metabolism even further. Fresh ginger, cumin seeds, black mustard seeds, and lime all aid digestion besides being richly flavorful. They are also warming foods, which bring balance to the dish for vata and kapha types, who tend to be cold natured.

Ayurveda identifies the healthiest meal as one that provides all six tastes in one sitting. Those six tastes exist in this one very simple dish:

A note about cucumbers: They can be hard to digest for vata types, but much easier when they are cooked rather than raw and also when they are seeded. You can eat this soup as a raw dish, if you prefer, but as a proponent of the Ayurvedic way, I propose you try it cooked at least once! I’ve tried it both ways and find the taste is richer and less bitter when cooked.

This is a very light soup, more flavorful than filling, so plan to make it when you serve it alongside a vegetable plate, with veggie burgers, or other entrées that will satisfy your hunger.

1. Peel the cucumbers. Cut each in half lengthwise and scrape the seeds out with a spoon. Chop the remaining cucumber into bite-sized chunks and set aside.

2. Bring a 3-quart (or larger) soup pot with stock or water to a gentle boil. Add the cucumbers and reduce the heat to medium-low for 10 minutes until the cucumbers are just tender.

3. While the cucumbers are cooking, heat the ghee or oil in a small sauce pan on medium heat. When the fat is hot, add the mustard seeds and cover until the seeds pop like popcorn. Turn off the flame or remove the pan from the burner and add the cumin seeds and curry leaves. Let these sizzle for 30 seconds or so, until the spices are fragrant.

4. Add the spice mixture to the soup pot along with arugula and ginger and stir. Remove the pot from the heat to let it cool to room temperature. If you wish to speed the process, you can add some ice or refrigerate the soup for 15 minutes. Add the cilantro, mint, lime juice, and salt, to a robust taste. Serve at room temperature.

Add a whole clove of garlic